Fire Force has kept fans entertained for years now, but as is with all things, everything must end at some point. Earlier this year, reports confirmed Atsushi Ohkubo would end his hit series sooner rather than later, and he certainly made good on the promise. After all, Fire Force just dropped its final chapter, and the artist is celebrating the end with a special sketch.

The piece came from Twitter as Okubo welcomed the latest publication from Kodansha Comics, the publisher behind Fire Force. “In today’s new magazine, my mission of publishing Fire Force for nearly seven years has been completed,” the artist wrote. 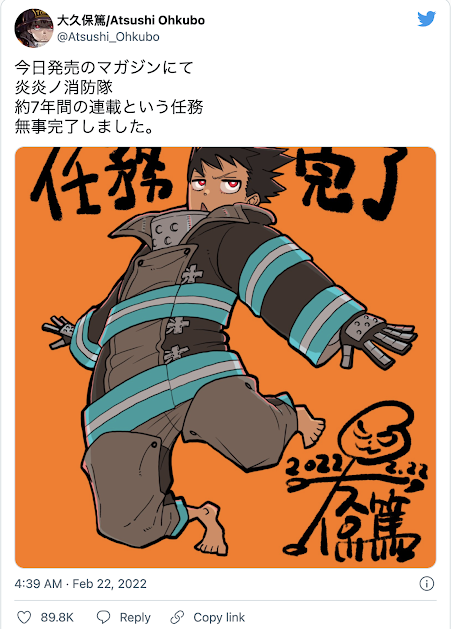 As you can see above, Okubo posted a colorful sketch for Fire Force fans to embrace as the manga closes shop. The piece highlights Shinra Kusakabe as the lead is donning his usual fire-fighting gear. The rest of his comrades can be found within the final chapter’s pages, so readers will want to check out this emotional update ASAP.

At this time, Ohkubo has no plans to continue Fire Force in any way, but the franchise does have some fuel left to burn. After all, its anime adaptation from David Production hasn’t finished. Season two was aired in 2020, and there has been no word on season three since. So of course, netizens are crossing their fingers for a third (and likely final) season announcement as Anime Japan nears its start next month.

Fire Force manga (Japanese: 炎炎ノ消防隊 Hepburn: enen no shouboutai,”fire brigade of flames”) is a Japanese shōnen manga series written and illustrated by Atsushi Ōkubo. It is published by Kodansha and has been serialized in the Weekly Shōnen Magazine since September 23, 2015, with the chapters collected into twenty tankōbon volumes as of October 2019. Terror has paralyzed the clockwork metropolis of Tokyo! Possessed by demons, people have begun to burst into flame, leading to the establishment of a special firefighting department: the Fire Force, ready to roll on a moment’s notice to fight spontaneous combustion anywhere it might break out. One of the Fire Force teams is about to get a unique addition: Shinra, a boy who possesses the unique power to run at the speed of a rocket, leaving behind the famous “devil’s footprints” and destroying his shoes in the process. Can the Fire Force discover the source of this strange phenomenon and put a stop to it? Or will the city burn to ashes first?